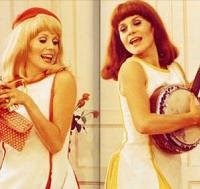 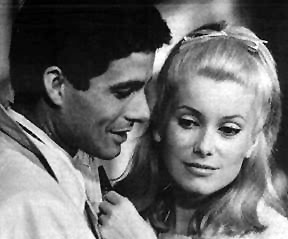 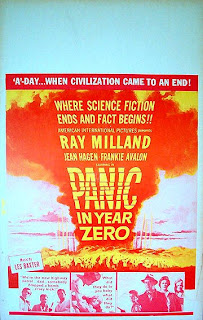 In this podcast I look at the 1962 nuclear war scare film "Panic In Year Zero!" starring Ray Milland and Frankie Avalon and gush lyrically about the two 1960s Jacques Demy musical masterpieces, The Umbrellas of Cherbourg and The Young Girls of Rochefort.
Email comments to kultguru@gmail.com

Go here for some more of the music from Demoiselles De Rochefort.

I'm going to talk about this movie in the podcast this weekend, but here's a preview of this weird and wonderful musical directed by Jacques Demy and with music by Michel Legrand. Chanson des Jumelles.

And an amateur lip-synch version of it too:

Posted by Unknown at 16.5.08 No comments: Links to this post

Berlino - Appuntamento per le spie - a.k.a. Spy In Your Eye. This one has it all, bionic eyes, chicks, knife-throwing assassins. What more can you want?

Kiss The Girls And Make Them Die a.k.a. Se tutte le donne del mondo (1966) Starring Mike Connors who went on to make the cool private eye TV series Mannix a year later. The banana symbolism in the trailer seems a bit overt...

Operation Kid Brother a.k.a. O.K Connery was a spy movie starring Sean Connery's brother Neil and a number of actors from James Bond films. Adolfo Celi, Bernard Lee, Lois Maxwell and Daniella Bianchi. Neil was an okay looking guy, but not as charismatic on screen as Sean...

The Venetian Affair was a solid spy thriller starring a post-Man From Uncle Robert Vaughn, Boris Karloff, Felicia Farr and that delicious addition to many eurospy movies, Elke Sommer.

Mission Bloody Mary was a 1965 spy movie starring American actor Ken Clark as Dick Malloy Agent 077. I have two of the Dick Malloy movies, and they're interesting in a low budget way.

Try some Eurospy movies if you can find them. They're an interesting moment in cinema history, an offshoot of Bondmania which has literally hundreds of examples to explore. I'd also recommend buying the Eurospy Guide from Amazon.com as a great reference for this subgenre of exploitation films.
Posted by Unknown at 13.5.08 No comments: Links to this post