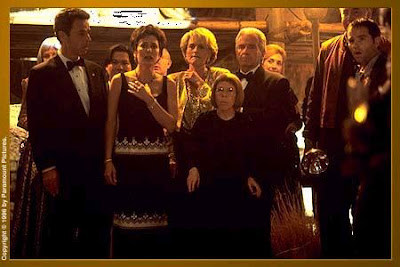 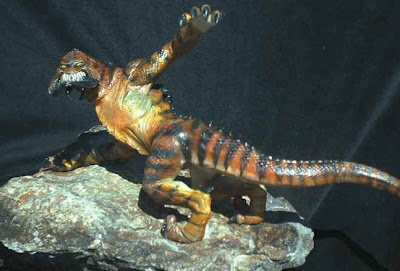 Good monster movie making is an art. There are certain basic ingredients for success. You need an unusual and interesting setting that can become an extra character in the film. You need non-conformist protagonists who are intelligent and resourceful. You need secondary characters acting as both comic relief and a method of humanising and explaining characters of the protagonists. You need selfish, unpleasant people to become monster food. And you need a really great monster.

The Relic has all of these ingredients. It's a scary ride of a movie made by people who know the conventions of this genre well and subvert the stereotyping in bold and interesting ways.

The Museum is both essential to the plot and a definite presence in the movie. As it changes due to the monster's actions, the characters are thrown challenges based on those changes. It provides both sanctuary and killing ground for the characters. It isn't just there because someone thought it would be groovy place to let a monster loose.

The protagonists are evolutionary biologist Margo Green (Penelope Ann Miller) and Lieutenant Vincent D'Agosta (Tom Sizemore). A gruesome murder in the Museum throws them together and both of them have roles to play in the solving of this murder.

Initially, it's D'Agosta's police work that reveals the clues, later it's Green's gene sequencing software and her scientific knowledge that puts the pieces together.

Though there's a definite rapport between these two, the script doesn't make the frequently seen mistake of having them fall in love nearly instantly while being chased by a monster. There's an attraction but it is cleverly portrayed as the possible start of something between them.

The secondary characters are chosen well. Linda Hunt as the Museum's director, Doctor Ann Cuthbert brings her usual intelligence and humanity to the role. When she's wading through a flooded tunnel, we laugh because the water's up to everyone else's chest and it's brimming against her lower lip. We laugh because she's believable and likeable.

James Whitmore's casting as Dr. Albert Frock is a wry, knowing decision. Forty five years ago Whitmore acted in another 'monster in the tunnels' movie - the one that started the whole atomic mutation monster cycle of the fifties -Them! He's a wry, humorous and humane presence in the film. His death in 'The Relic' mirrors the one his character suffered all those years ago. It's a easter egg hidden for the knowledgeable viewer to find.

The other delightful surprise is Audra Lindley's turn as the forensic expert who performs the initial autopsy. She's a gender reversal of the usual cynical coroner cracking one liners between analytical descriptions of hideous wounds. Lovely stuff.

The monster-fodder nasty characters are the usual types but having one of them being an Asian American is a good touch. Freedom from stereotyping also means that negative characters will be portrayed by members of a minority group.

The monster itself, created by Stan Winston, is impressive and impressively realistic. Unlike other monsters from the past, this one is unlike anything you've seen before in a movie. As much as the script and acting, Winston's creation takes this film out of the ordinary.
Posted by Unknown at 23.3.08 No comments: 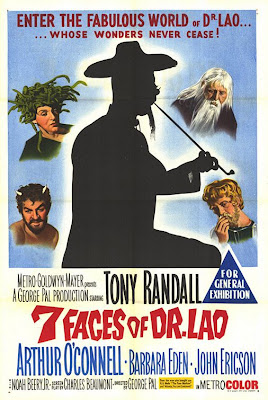 Podcast 10 is here. I look at the life and works of György Pál Marczincsák,a.k.a George Pal, the producer and director of some of Hollywood's best science fiction and fantasy films in the middle years of the last century. Check these films out.

Beat that Steven Spielberg....
All comments to kultguru@gmail.com 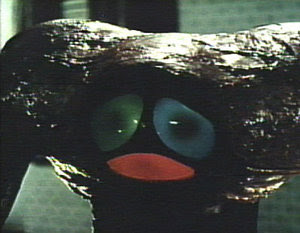 In Podcast 10 I will be looking at the fourteen feature films of that pioneer of genre cinema, George Pal, talking about the fourth of my alternative Magnificent Seven action film stars of the 1960s and discuss what I've been watching lately. It will be up and running in roughly 24 hours.
Posted by Unknown at 15.3.08 No comments:

Written and directed by: Matthew Bright 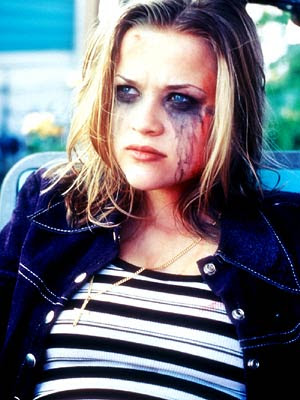 About ten years ago, Stephen Sondheim and James Lapine retooled some fairytales and called the resultant musical Into The Woods. One of the tales explored was Red Riding Hood. Freeway is the best exploration of that fable since the Sondheim/Lapine big bad wolf soft-shoe shuffles across the stage with his flaccid phallus bobbing in time to the music.

To start with, this is a very funny movie in an utterly politically uncorrect way. Humour and political correctness have never shared a joint anyway. This film seduces us into laughing at the most hideous scenes and scenarios, partly because we're seeing them through the eyes and mind of someone who finds them funny.

Vanessa (Reese Witherspoon) is a transplanted Texan white trash teenager living in California with her junkie/prostitute mother Amanda Plummer and her lecherous and hilariously loony step-dad (Michael T. Weiss looking and acting very unlike his character Jarrod in The Pretender). Mum and step-dad are arrested by some realistically unsympathetic police, Vanessa legcuffs her social worker to a bed and takes off with her basket of belongings to go to live with her Grandmother in Stockton California.

Vanessa's bright but not educated and very naive. We first see her trying hard to read “The cat drinks milk” from a blackboard at school. But she has her own sense of values, a fearlessness and a ferocious independence that ultimately serves her much better than does society or most of the individuals she meets.

The worst of these is Bob Wolverton, a boys school counsellor she meets when her car breaks down. Bob uses his training to manipulate Vanessa psychologically until she realises that he's a notorious serial killer. As in the original, unexpurgated Grimms fairytale, Vanessa rescues herself, shooting and disfiguring Bob until his physical appearance matches his personality. She's arrested and tried and convicted for shooting and robbing him.

Ultimately she escapes and has her ultimate showdown with Bob at Grandmother's trailer park home but along the way there are twists and turns and surprises to keep the audience amazed.

Reese Witherspoon as Vanessa is amazing. She reminds me of Candace Rialson who played similar roles in 1970s Roger Corman movies. She has big baby blue eyes and a stare-you-in-the-eye forthrightness that turns Vanessa into one of the coolest female heroes in recent movies. She knows what evil is, what to do about it, and knows the difference between true evil and weakness of character.

The smaller roles are filled with familiar faces. Kiefer Sutherland is chilling as Bob, before and after the metamorphosis. Brooke Shields plays Bob's monstrously self-serving wife, Dan Hedaya is one of the cops who gradually discovers that Vanessa's not the monster of the piece, Bokeem Woodbine is charismatic as Vanessa's tragic boyfriend Chopper Wood(sic).

This film's not for everyone. There's violence and ugliness and tragedy and heroics and a lot of blood. But it is a valid and interesting interpretation of the original story and stays truer to it than the Sondheim/Lapine version did. 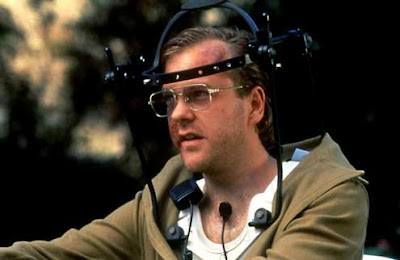 Godzilla: We're off to see the lizard... 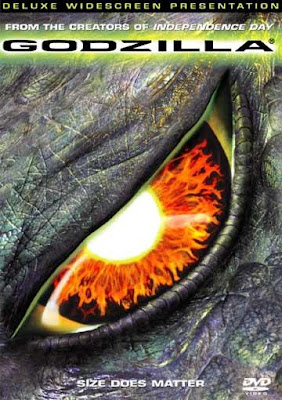 Recently I decided that science fiction movies, if they're worth considering at all, can be divided into two simple categories. SF films and SF eye-candy. Godzilla is definitely in the latter category. It is pure eye candy. No forebrain required. That isn't to say that it isn't fun, but a moron can enjoy it as easily as can a genius.

Nico Tatopoulos (Matthew Broderick) is a scientist studying earthworms around Chernobyl. He's grabbed by the US military to examine a site in Panama where giant lizard footprints have been found. On the thinnest of pretexts, the giant mutant marine iguana is heading for Manhattan Island, followed by Nick, the US military and a hip and suave bunch of French secret service guys lead by the ever amusing and watchable Jean Reno, who is to French movies what Chow-Yun Fat is to Hong Kong cinema.

That's all you need to know, really. There are some nice digs at the media and at America in general, a lot of expensive real estate gets turned into landfill and there's a climax reminiscent of the Ray Harryhausen ending to The Beast From 20,000 Fathoms, albeit with some more sophisticated special effects. Jokes punctuate the movie, which is only to be expected of a flick in which a giant Galapagos lizard detrimentally renovates the Chrysler Building. The dumbest thing to do would be to take the premise seriously. That hasn't worked well since the original 1954 Gojira (the version without the Raymond Burr additions). It only worked then because the mass destruction echoed Japan's experience during World War 2 and the idea of a demon being raised by black science rather than black magic was still new.

This Godzilla is played for laughs and spectacle. At that level it works tolerably well, though I would've liked more edge to the satire.

And I am glad that they decided not to kill off Jean Reno's character. He was the best human actor in the film.
Posted by Unknown at 8.3.08 No comments: 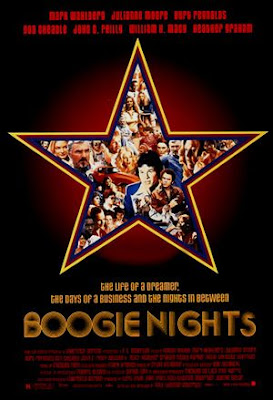 Writer/Director Paul Thomas Anderson has managed to get the 1970s/80s period feel perfectly. From the first scene in the Hot Traxx disco, we're drawn into the past. Anderson uses long, perfectly executed tracking shots to give the audience the feeling of being immersed into the discos and parties. We're mingling with the crowd.

Mark Wahlberg's Eddie/Dirk is great. He starts out as a hurt kid and goes through the cocaine junkie hustler decline and out the other side without a false note.

Reynolds' Horner is fantastic. Ten minutes into the film I forgot that he was Burt Reynolds. For an actor with such a high profile, that's quite an accomplishment. (1997 was the year for actors to come back in from the wilderness. Reynolds, Peter Fonda and Robert Forster being the three that immediately come to mind.) Horner is genial, sensitive and although he has inflated ideas about the merit of his work, he genuinely believes that he's making quality films and he has the ability to pass that belief on to those he's working with.

Julianne Moore is both sexy and maternal as Amber Waves. Her first sex scene with Dirk is as hot as anything I've seen in a mainstream movie in a long time. Not too much is shown, but it's in the faces of both actors and the sometimes amusing reaction shots of the film crew.

Anderson does something interesting with this film. He doesn't judge his characters and he portrays the group as a family. Obviously, it's not a traditional family but these characters are unable to function as themselves within the constraints of mainstream society. Every interaction they have with the outside world leads them to a kick in the guts. But they look after one another and in the most important ways, form a family.

I wouldn't recommend this film for everyone. People with a lot of concerns about erotica/porn and the recent history of both won't like this flick. But if you want to catch on to one of the best new directors in the business early in his career, check it out. Anderson's the man to watch at the moment.
Posted by Unknown at 8.3.08 No comments: